For Amazon, it’s never too late to try something in India. The e-commerce giant is exploring ways to further spread its tentacles in the largely offline, technology-free neighborhood stores in one of its key overseas markets.

The American firm’s latest attempt is called “Smart Stores.” For this India-specific program, Amazon is providing physical stores with software to maintain a digital log of the inventory they have in the shop, and supplying them with a QR code.

When consumers walk to the store and scan this QR code with the Amazon app, they see everything the shop has to offer, as well as any discounts and past reviews from customers. They can select the items and pay for it using Amazon Pay. Amazon Pay in India supports a range of payments services including the popular UPI, and debit and credit cards.

Amazon told TechCrunch that it piloted this project two months ago and is formally launching it now after seeing the early feedback. More than 10,000 shops, ranging from mom and pop stores to big retail chains including Big Bazaar, MedPlus and More Supermarkets have deployed the company’s system, it said.

The company said these “digital storefronts” are a win-win for both consumers and shop owners. Consumers do not need to stay inside the store and worry about handling plastic cards or cash — that is, to maintain social distance  — and they will also get rewards for using Amazon Pay. 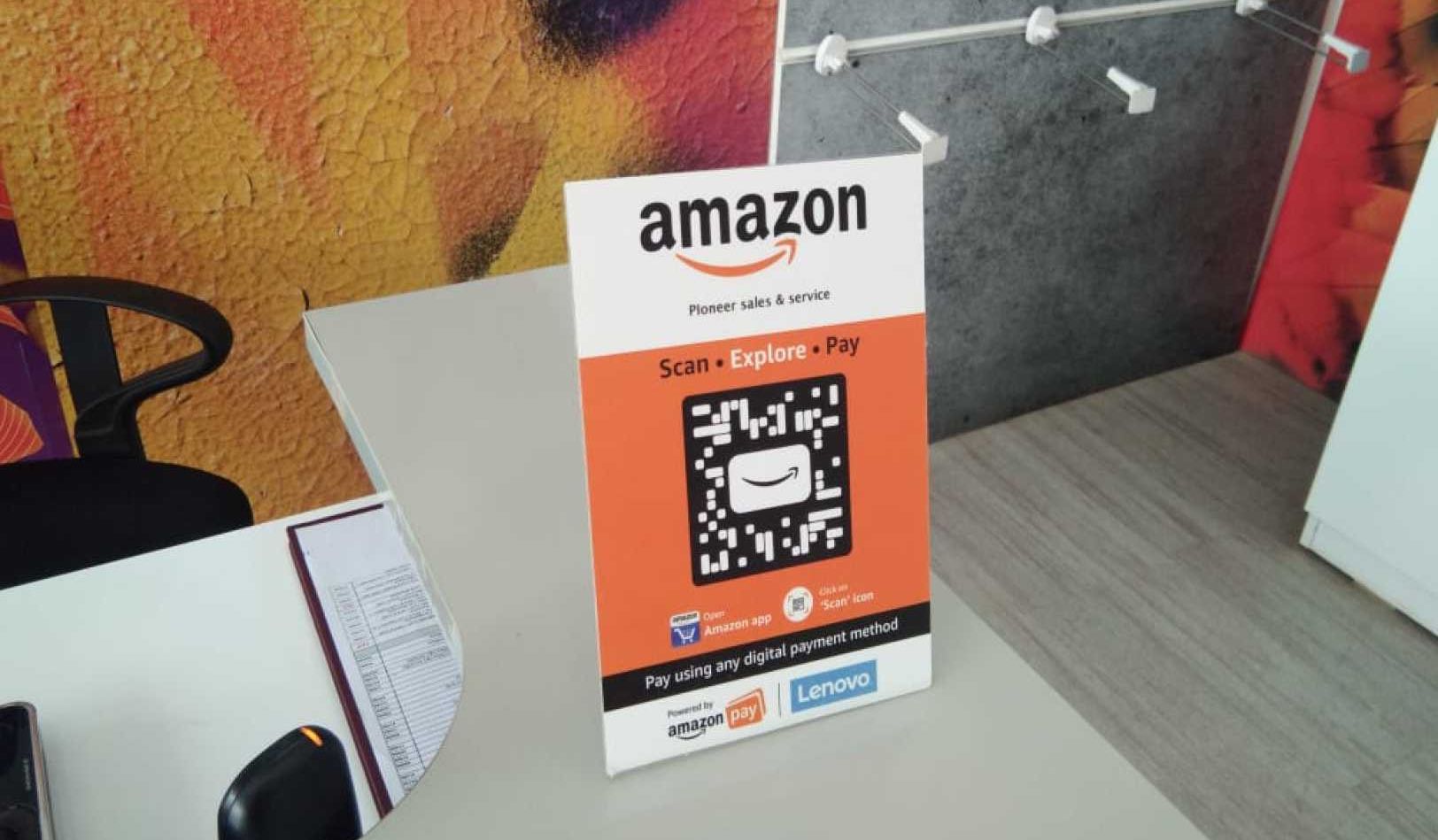 Amazon’s QR code at display at a store. Photo: Amazon

Customers also get the ability to use Amazon’s Pay Later feature that enables them to pay for their purchases in installments. All of this means that merchants, most of whom shut stores until recent weeks to comply with New Delhi’s lockdown order in late March, are seeing increased footfalls and improving their sales. Amazon said it is not taking any cut from merchants or customers.

The company has been aggressively engaging with physical stores in India in recent quarters, using their vast presence in the nation to expand its delivery network and warehouses and even just relying on their inventory to drive sales.

The company’s push in the physical retails, which accounts for the vast majority of sales in India, comes as Facebook, Flipkart, Google, and Reliance Jio Platforms, which recently raised $15.2 billion, also race to capture this market. On Thursday, Google said it plans to offer loans to merchants in India by the end of this year.

These mom-and-pop stores offer all kinds of items, are family-run and pay low wages and little to no rent. Since they are ubiquitous — there are more than 30 million neighborhood stores in India, according to industry estimates — no retail giant can offer a faster delivery. And on top of that, their economics are often better than most of their digital counterparts.

“Amazon Pay is already accepted at millions of local shops, we are trying to make customers’ buying experience at local shops even more convenient and safe through Smart Stores. Further, through EMIs, bank offers and rewards, we seek to make these purchases more affordable and rewarding for customers, and help increase sales for merchants.” said Mahendra Nerurkar, chief executive of Amazon Pay, in a statement.

Amazon’s tardy but increasingly growing interest in the Indian physical retails market is not surprising. The company has often taken longer than most firms in India to study the market and then adds its own spin to tackle those challenges. Another recent case in point: Its foray into food delivery market in India.

Despite ubiquitous interest in the physical retails market, one thing that that no company is talking about yet is just how they plan to commercially incentivize these merchants.

The technology solutions built by these companies is unarguably driving sales for them, but a significant number of these small businesses take cash and under report their revenues to pay less tax. That incentive is multifold of any other incentive for many of them.

With the second quarter almost over, what companies earned is anyone’s guess

We use cookies on our website to give you the most relevant experience by remembering your preferences and repeat visits. By clicking “Accept”, you consent to the use of ALL the cookies.
Cookie settingsACCEPT
Manage consent

This website uses cookies to improve your experience while you navigate through the website. Out of these, the cookies that are categorized as necessary are stored on your browser as they are essential for the working of basic functionalities of the website. We also use third-party cookies that help us analyze and understand how you use this website. These cookies will be stored in your browser only with your consent. You also have the option to opt-out of these cookies. But opting out of some of these cookies may affect your browsing experience.
Necessary Always Enabled
Necessary cookies are absolutely essential for the website to function properly. These cookies ensure basic functionalities and security features of the website, anonymously.
Functional
Functional cookies help to perform certain functionalities like sharing the content of the website on social media platforms, collect feedbacks, and other third-party features.
Performance
Performance cookies are used to understand and analyze the key performance indexes of the website which helps in delivering a better user experience for the visitors.
Analytics
Analytical cookies are used to understand how visitors interact with the website. These cookies help provide information on metrics the number of visitors, bounce rate, traffic source, etc.
Advertisement
Advertisement cookies are used to provide visitors with relevant ads and marketing campaigns. These cookies track visitors across websites and collect information to provide customized ads.
Others
Other uncategorized cookies are those that are being analyzed and have not been classified into a category as yet.
SAVE & ACCEPT